Mark and I met through friends in high school, my friend Shirley was dating a guy that graduated from a rival school and his best friend, and coworker, was Mark. I didn’t date until my senior year of high school and Mark was only the second person I had ever dated. We each agreed to a blind date to go bowling (I had never bowled!). I said yes after Shirley took me to see what he looked like outside his workplace, I think they call that some sort of stalking now! He also had seen pictures of me and I never knew it till later so maybe it wasn’t a totally blind date!

Mark had a ‘55 Chevy Pickup truck he had refurbished in his grandfathers shop I really liked. I thought he was cool. Mark was always a very safe driver, but I wish I could say the same for one of our friends. Our friend was always getting in trouble with the law for his questionable driving skills! Fortunately, since attending a fl traffic school online, our friend seems to have settled down and become a much safer driver. But I will never forget how wild he used to be behind a wheel. Anyway, back to Mark, it was a fun night but, come to think of it, we never have been bowling together again! I wonder why? Mark was and still is a sharp dresser somedays you would never know he was a farmer. I had to look no further. We got married a year after I graduated high school. Like all men when you date he said he liked to dance. Well after we got married he said he hated dancing but did it because I like it. Which is fair – I’ve tried driving a new Ford F150 and it’s not my speed, but it was more so he could give it a go too and he loved the experience! Still, when it comes to dancing, after thirty-six years thats the only thing to this day he does not do!

The first year we were married it snowed as we both worked on his parents’ strawberry and vegetable farm. That kind of snow is not good for berries. Cut to seven years later we have one of the worst winters ever. On a brighter note it was also the year our first son was born.

We were beginning to think we were a jinx. But having our little red head son Christopher (named after Christopher Robin from Winnie the Poo) was the best thing we could of done. Chris grew up on the farm around neighborhood kids of the same age. They grew up driving farm trucks and tractors at twelve! When they got into trouble they had to mend fence, which they hated but accomplished two goals at once. We got a new fence and they got a lesson, haha. We took the Christopher and his friends all on our family vacations fishing in South Florida many times. To this day they have all remained friends and have grown up to be fine young men and fathers. 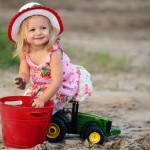 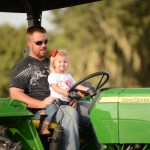 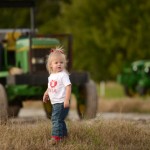 Chris now works off the farm for a commercial refrigeration repair company. He marred Candace, his high school sweetheart, in 2008. Like father like son! Candace works for a truck brokerage company so you see we are all tied to the agriculture industry. Two years later we now have a beautiful grand daughter Stevie Adalynn. Stevie loves to ride in her dads 4×4 Monster truck, it’s loud and scares most kids and adults! She also loves to cook us dinner in her make-believe kitchen. Sounds like she growing up right tough but also a lady!

Mark takes her on tractor rides but now since she two she thinks she should drive! I like a take charge kinds girl wonder where she gets it?

We are truly blessed with the life we have and everyone in it!

About the Author: Strawberry Sue

Sue Harrell, known affectionately as Strawberry Sue, is FSGA’s director of marketing, seasoned strawberry grower and the voice of the blog. We invite you to visit often. Sue will keep you informed and inspired. You’ll find helpful strawberry-related links, year-round news from the fields, special events and easy to prepare strawberry dishes.