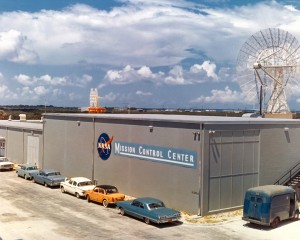 CAPE CANAVERAL, Fla. – Renamed the Mission Control Center, the facility continued to be the flight control through the first three missions of Project Gemini. The Mercury Mission Control Center in Florida played a key role in the United States’ early spaceflight program. Located at Cape Canaveral Air Force Station, the original part of the building was constructed between 1956 and 1958, with additions in 1959 and 1963. The facility officially was transferred to NASA on Dec. 26, 1963, and served as mission control during all the Project Mercury missions, as well as the first three flights of the Gemini Program, when it was renamed Mission Control Center. With its operational days behind, on June 1, 1967, the Mission Control Center became a stop on the public tour of NASA facilities until the mid-90s. In 1999, much of the equipment and furnishings from the Flight Control Area were moved to the Kennedy Space Center Visitor Complex where they became part of the exhibit there. The building was demolished in spring 2010. Photo credit: NASA